Over the past year or so, I’ve read many articles about magnetic loop antennas, questioning to myself are they really all that great compared to the typical dipole that I’ve been using for 3+ years. Well, I finally decided to give it a shot and build something from what I had on hand, and thanks to a quite a few club members was able to get a few missing parts.

To begin with, my design goals was to work 40m and 20m since those are the two primary bands I use for DX communications. I wanted the first iteration of the antenna to be simple, portable and obviously low cost as I sure didn’t want to spend money only to find out this antenna stunk. Plus I wanted to run a bit more than just QRP.

So off I ran researching various sites and came across two that I found very helpful.

The first one is where I got the ideas, the second one is an online calculator for trying out different scenarios, with input power, loop size, wire diameter, and input power. I won’t go into all the details of the theory but based on some simple rules of thumb:

Based on the following for 40M

I get the following output from the calculator

Antenna efficiency: 28% (-5.5 dB below 100%) ß not super-efficient, but results are impressive
Antenna bandwidth: 10.9 kHz <- this needs to be 3khz or larger to operate SSB, 6khz for AM
Tuning Capacitance: 146 pF <- take note of this, this is the high value for your variable cap

Now calculating at the top end of 14M band

I get these results:

Antenna efficiency: 83% (-0.8 dB below 100%) <- this is considerably better then 40m
Antenna bandwidth: 65.7 kHz <- No problem here, gives you 65khz space to move around before retuning the capacitor
Tuning Capacitance: 35 pF <- take note of this, as this is the low value for your variable cap

With all that in hand, I needed to source a variable capacitor that could go from 35pf to 150pf, and hopefully handle 2.5kv, thanks to Ken Fields(KO9H) he had the perfect air variable cap for the job. An old EF Johnson 30pf to 150pf 23 plate variable cap. Voltage rating was a guess but based on others I found on the internet it was probably between 2.5kv and 3.5kv.   I conservatively guessed 2.5kv

As for materials, well you could use any coax, hardline, Heliax, copper pipe you can find. But a few things I noticed, the larger the diameter, the narrower the operating bandwidth, and the higher the capacitor voltage. Efficiency does go up though,

Using the figures for 40m but with a 1.5 inch diameter Heliax cable you can see some drastic changes.

My efficiency goes from 28% to 54%
Antenna Bandwidth though goes from 10.9khz down to 4.34khz,,, that’s pretty darn narrow for SSB operation
Capacitor voltage goes from 2.3kv to 4kv, thus you’ll need to reduce power, or get a much more expensive variable capacitor.

As for parts list, this is what I ended up using:

Here are some photos of the finished product. Take note, I attempted to put eyelets on the spreader, but wouldn’t ya know it, the N connectors wouldn’t fit.   Oh well, 3M super 88 to the rescue.

Above are the internals and the rear. I designed it so I could unscrew the top spreaders from the case to transport. There’s enough room in the box for a gear reduction motor for remote operation in the future. N type connectors on the sides, are soldered to the outside shield from some RG8 coax(center insulator and conductor was remove to make more of a braid).

Side spreaders are just pressed into the cross pipe so I can take it apart.

Now for the comparisons…

I chose to operate FT8 at 40 watts when I did this to show what stations heard my signal using  https://www.pskreporter.info/pskmap.html

I think this will be more subjective than trying to convey signal reports on SSB, though I’ve made contacts just fine with it with 50 watts. 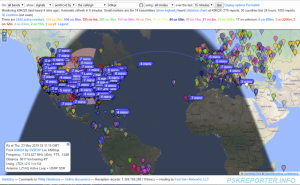 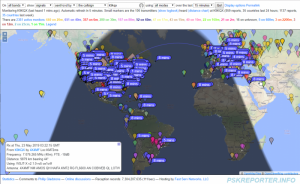 Magnetic Loop Receive – Below is a view of the panadapter, notice how there is a pronounced peak where the antenna is tuned and as you deviate from that the received signal gets weaker (click image to expand).

Dipole Receive – Below is a screen shot of the panadapter, you can see that the receive is has a flat response across the entire band (click image to expand).

It’s not surprising the Dipole does work better, but think about it, It took me a long time to get that up in the trees, tune it, maintain it during storms. I bet I worked on that thing over the course of a year to really finally have something I could raise and lower to maintain all through trial and error.

On the other hand, I spent a Friday night and a Sunday afternoon and had this on the air. This little Magnetic Loop does remarkable well, sits literally two feet off the ground. I can put it in my trunk, takes all of 5 minutes to put it together at a remote site and the results are pretty darn good. Another positive I noticed, reduced static crashes, about 2 S units typically. I can rotate it to focus on certain areas to work. I does have a narrow bandwidth, but that could be a good thing during a field day with multiple transmitters as you might not get interference from the others working nearby.

So there you have it, some actual comparisons. For all those living in HOA’s, no trees, no tower, etc, this really could be the difference from not operating to getting on the air.