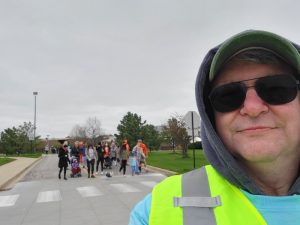 The Schaumburg Amateur Radio Club assisted in communication for the National Multiple Sclerosis Society’s MS walk on May 1, 2022.
It was a cold and windy morning.  The schedule was for walkers to start on the walk of 1 or 3 miles to raise money for the MS Society at 9:00 AM.
There was a map showing the course of the walk, and directions indicating which way to go at each of the ‘mile markers’ (not nearly a mile apart.) – The course markers to show the way had been placed during the tornado warning the night before, and it seems some of them blew away.  Another aspect was that for some reason, they decided to walk the course in reverse – marker 29, 28, 27 . . . instead of going on a more ascending numerical order.  This seemed to cause directions (make a left turn right here) to be confusing, ’cause you would have to make a right turn left here when you got here, following the course in reverse, and assuming there WERE course markers at the desired locations.
Fortunately, there were police officers (not sure if they were Harper College police or Palatine police) who were directing the walkers on the course at a couple of places.  They *might* have been told to direct the walkers in the reverse of the course.  Some people said they were being directed the wrong way by the police.
Anyway, for some reason, they decided not to start the walkers officially until 10:00, instead of 9:00, and the wind made it feel cold.  It might have been that it WAS cold and the wind just made it feel even worse.  Of course, the participants came out early enough to start at 9:00.
However, at about 10:00, walkers took to the course.  Possibly because of the late start and possibly because of the temperature, almost all the walkers chose to walk the 1 mile route.
SARC provided radio communications support for the walk and no one was injured or failed to complete the course.  Every single participant (and probably even the married ones) completed the walk and got back to the start area, probably colder than they wanted, but intact.
There was a report of some kind of protester (We need MORE MS ! ! ???? ) but I don’t have any first hand knowledge of what the protest was about.  At the end, someone had locked their keys in their car, and Harper College police were trying to get the car open.
Nonetheless, the brave and (obviously) warm-hearted souls who participated in the support were (not in any particular order):
John KD9KSH
Robert W9RKK
Ed AC9SD
Phil WB9C
Doug W9YFC
Bill W9WEM
Al KD9FIA
Romel KD9MDM
Dennis KD9HIK
Rob N9MVO
Special thanks to all who supported the MS Walk this year.
73 de N9MVO,
Rob
Public Service Chair
Schaumburg Amateur Radio Club