Several of our members have offered (seed funding also begun) to organize a worthy build for our Construction Project Meetings.

Club members have the opportunity to join this group construction project, which is to build an essential piece of equipment for their shack:

What: 50 Ohm Dummy Load. Consists of Extruded Heat Sink, 250W 50-Ohm RF Resistor, SO-239 Connector, Professional Machining
When: Now! Anticipating builds to start >January Construction Project meetings
How: Reserve your Dummy Load with a $10 commitment via payment to SARC.  Please reply to Cliff Sowka K9QD via the SARC ALL email group to confirm your intent.

Bob Zuttermeister W9GEW then added to the impetus Dave began by offering his company’s resources, heat-sink inventory, and skills to prepare the chassis.

Bill Crockett KD9AUP has purchased 50 RF resistors and connectors. An impromptu survey during our December Business Meeting indicates more than half of the attendees present wish to build a Load for their shack. Several SARC members unable to attend the December Business Meeting may also wish to be included in the effort. Bob believes he has enough aluminum heat-sink inventory to build 50+ units.

We already have 44 commitments from our members, and Bob has said he can make around 50, so please let Cliff know as soon as you can.

Not many of us have probably given much thought on how we sound on the other end of a QSO. We figure the mic we got will do just fine and the rig will do its magic to get out on the air. Well, there are quite a few things you can do with many of today’s rigs to improve the overall enjoyability of your time on the air.

First off let me say I’m a bit of an audiophile, so for me having a natural sounding transmission and hearing it as well as I possibly can makes for a pleasant experience. I know very well you’ll never achieve full fidelity CD but taking a little time to utilize what might be available on your rig could make significant improvements.

The goal of all these settings is to improve your sound quality to have decent fidelity, improved readability and to help ensure that your transmitter is modulating in a way that increases the average power output without causing excessive distortion or clipping. To give you an idea when I turn off the processing and compression and talk the same way into my microphone my power output meter tends to hover around 50 watts with occasional peaks hitting 75 to 100 watts. When I turn processing and compression back on the power output meter increase with peaks hitting 100 watts much more often with it usually bouncing around 75 watts. If you have an ALC(automatic level control) meter, take a look at it when transmitting during testing. I try to keep that within the recommended range, not pegged out at its max safe range or exceeding it.

There’s probably a ton of additional things I’ve missed in this article but I think any new hams might find that these settings are a bit baffling at first and knowing what they do will help them better understand their radios.

Here is a link to download this article in Word format.

From time to time we’ll be bringing back photos of past events and featuring articles from past RHG issues.

To start the series off here’s a few photos of a fox hunt to track down a jamming transmitter located in downtown Chicago. The transmitter was found at the top of the Hancock building. These photos were taken in either 1997 or 1998 around Christmas as evidenced by the star hanging between the two antenna masts in one of the photos. 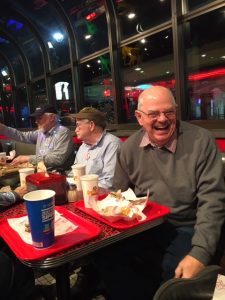 Below are some photos taken during the SARC Holiday Party at Garibaldi’s, on January 15th 2020.

In recognition of his contributions to the club, including the use of materials and machinery to build the group J-pole antenna project, and more recently the Dummy Load project, Bob Zuttermeister W9GEW also received a special recognition award and a very large cake!

In addition to the awards, the following members won the twice yearly prize drawing, where names are drawn from a list of members that check in to the club’s weekly nets.

Thanks must also go to John KD9KSH for organizing the event.

Cliff Sowka K9QD motion to accept the minutes of the December meeting.  So Moved.

Rob Glowacki N9MVO reported our first two events for 2020 will be the MS Walk May 3rd and the 4th of July parade for Hoffman Estates.

Fusion machine at the hospital will be removed and placed in spares.

The following folks were in attendance:

The next SARC Construction Project meeting will be on January 11, 2020 held at the Schaumburg Park District Tennis Club (Schaumburg Tennis Plus) beginning at 8:00 AM.

12/2    Gary Bernstein    N9VU     Gary was trying to confirm his membership acceptance   (I acknowledged his application but told him it was “in process” status and referred this matter to the Board).

12/14   Bernie Dekok      Bernie was trying to confirm his dues submission via Paypal from an iPhone device.  There apparently is some technical issue with that interface so he talked to Chris Brewer.

Harper College Maker’s Space:  Leo N9NBH will inquire with the school to ascertain if SARC should/could be a participant.

John KD9KSH confirmed with Garibaldi’s Restaurant for the SARC Christmas/Holiday Party Thursday, January 16th, we will meet at 7:00 PM.  Cliff will send a note to Rob to determine plans for audio set-up.

Danny KD9HIL has prepared a listing of proposed educational courses for Bill Crockett KD9AUP.  Danny could make these presentations available for use at future meetings.

Leo N9NBH reminded we are in need of a Membership Chair.  Effort of ~1 hour per week is required.  Current inquiries are captured electronically with both text and audio record retention.  Kent W9KAO will set a new traffic-forwarding path to Geoff’s KA9QGH email for follow-up.

Annual Corporate Report from the State of Illinois is expected this month.  SARC Corp Agent of Record:  Cliff K9QD is currently the club’s Registered Agent.

Internal Revenue Service:  Anticipating we will need to prepare our report for 2019.

Kent W9KO suggested we move the 50-AMP supply from the basement of Construction Project to the repeater site for storage and have ready access for any needed backup.

Burt AB9CV has been selected as SARC Chairman for 2020 by acclamation.

Bob Langsfeld WB9TZC reported on the Pekin Illinois location of Salvation Army’s use of our donated Rohn 45 Tower.  The SATERN team thanked the Schaumburg Amateur Radio club for the donation and reported the required effort for equipment installation is now underway.

At 9:09PM the Board meeting was adjourned.