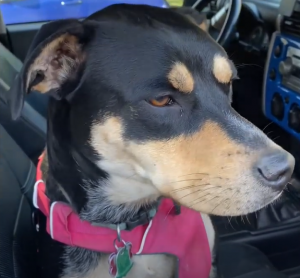 On November 27th 2020, the day after Thanksgiving, I headed out to Moraine Hills State Park (K-1012) for a POTA activation.  I had been there before, so I knew roughly where I wanted to setup my radio gear.

My plan was to setup with my QRP radio, the IC-703 Plus, and give the Wolf River Coils Silver Bullet vertical a good try out.  I had used it before, but without much success, so this time I had put together a few 32 foot radials which I hoped would improve things.

Setting it up wasn’t hard.  The coil screws into a mini tripod, and then I add an MFJ 1979 telescopic whip which I extend out to 102”.  I chose this length because it is one of the options that WRC suggest, even though the whip I have can go longer.  With the help of my antenna analyzer, I was able to tune the SWR to a decent level on 40m.

I’m not sure if it was band conditions, or something that I was doing wrong, but I struggled to make any contacts.  I did finally make one, but that was it, just one!  I did realize afterwards that I did not have the audio compression enabled on the radio, and this could have helped make my signal heard a little better.  I will try that out next time.

Thankfully I had brought trusty Elsa with me, my K9 companion, so we went for a good hike before calling it a day and heading back home.  It’s not always about how many contacts you make!  It was still a nice day out in the fresh air, and Elsa had a fun time in a new location.

Here is a video, where you can see more about my setup and my POTA activation attempt.  10 contacts are required to make it an official activation… oh well, better luck next time! 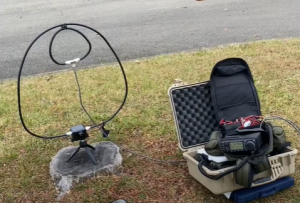 Early in December 2020, I went out to Busse Woods Forest Preserve to test out a new antenna; the AL-705 Magnetic Loop from Alpha Antenna.

It is a low power (20W) very portable magnetic loop covering 40m to 10m, designed and built by Alpha Antenna and marketed by ICOM, as part of their IC-705 portable field radio package. It can of course be used with any radio, as long as power is kept below the 20W maximum.

On my way to the Forest Preserve, I was chatting on the SARC 2m repeater (K9IIK), and a couple of friendly folk offered to help with my initial tests.

I had never used a magnetic loop antenna before, so it was a very new experience for me.  Overall it worked as expected.  Tuning it can be a little fiddly, but I understand that is the nature of this type of antenna.  The bandwidth is very tight, so any frequency change more than a few kilohertz on the radio requires a retune of the antenna.

I see it being best suited for things like Parks On The Air activations, Field Days, or any other situation where you pick a frequency and call CQ, rather than chasing around the band for contacts.

Here is a small video showing how things went.

The following weekend, I decided to give it another try.  At the same park, but at a more comfortable spot with a picnic table, I set things up again and yes, here is another video showing how it went.

Our State of Illinois Annual 501c3 Report has been filed but Geoff’s KA9QGH Wisconsin address wasn’t available on the club’s Roster so the Mundelein address was submitted.  $10 filing fee was paid by the Secretary.

Rob Glowacki N9MVO informed there is nothing to report at the moment.

John Zietlow K9WIC.  Activity currently on hiatus.  Additionally, Burt Schultz AB9CV published SATERN’s planned activity: The SATERN group will be monitoring the clubs repeater on the days & times shown below.  If an emergency arises, please give them full & unrestricted use of this machine/repeater. Tnx U very much.  Burt Schultz AB9CV SARC BOARD CHAIR

As John K9WIC recommends, this could be restated:

As Chairman of the Board, Burt Schultz has authorized SATERN to use the SARC repeater for their communications during a special exercise associated with the inauguration from Sunday to Wednesday (Jan 17-20).  Scheduled SATERN net control stations monitored the repeater for possible Salvation Army communications.  Normal users of the SARC repeaters were requested to relinquish the repeater to SATERN if they needed the machine to establish a net.  Fortunately, other than the Monday night weekly net and the regular wellness nets, no additional nets were required.

Bill McGovern W9WEM no report.  Cliff K9QD has opened communication with Merry of the clerical support staff of the front desk at the Tennis Club.  She will request a ruling from the building manager Ryan and said they may also work with Rob Ward of the Park District to confirm we’ll be allowed to return to Saturday meetings.  Cliff K9QD also suggested VE exams and Business Meetings may also be convened in the basement if CRC remains closed for the duration.  Governor Pritzker’s recent rulings regarding limited openings of current lockdowns may allow us to return to the basement meeting room.  Update expected shortly.

Mike Griffiths K9KMV reports he is pleased to receive articles for publication.

Leo N9NBH previously reported our training schedule will be on hiatus for the duration.

Thanks everyone, for checking into our Club NET.  31 Hams checked in!!!  Question of the night:  Do you have any specific Ham Radio plans for 2021?   Radio purchases, equipment upgrades, antenna installation, etc…    Though the Wheaton Hamfest is officially closed to the public, you can still virtually attend.  John Zietlow, K9WIC sent out details to the reflector.  Check it out.  We also had some interesting traffic regarding antenna installations in Roselle IL,.   Finally,we expect to resume outdoor VE Testing in March.  Check the Club Web Site for details if you are interested in taking a test…and other topics.

Be Safe and Happy!!!

The following operators checked in:

Please let me know if there are any corrections.

General question to all checking in:  What do expect from Tech Net?

Discussion included asking how operators got into Digital Modes, what did they have to learn to get it to work and what would you tell an operator interested in starting with Digital Modes.

Roberto (WA9E) provided information about the DuPage Tech Net, the Northern Colorado Amateur Radio Club Tech Set.  Also, he reported that Mel (W9FRT) has been provided a hand held transceiver and may be getting back on the air, and relayed a conversation he had with Kent (W9KAO), suggesting that SARC may want to look into some preventative maintenance on the repeater SD cards.

Thank you to all the hams that checked into the net Thursday evening.  The question for the evening was have you experimented with a magnetic loop?  Attached at the bottom of the email is some additional information on magnetic loops.

Also you tube Kevin Loughin for more info on 160 and 80M magnetic loops.

I want to thank all the hams who checked into the net.  The questions for the net were:

Do you own a HF radio that is portable? What type of antenna do you use for portable

use?  At the bottom of the email are two links on magnetic loops.

Dennis K9HIK No activity at the moment.

With the help of Geoff KA9QGH’s ZOOM-enabled call, the meeting was called to order at 7:00 PM

Chris Brewer AC9GN. Not present and previously requested an interim Treasurer be appointed while he deals with family medical stress.  John Zietlow K9WIC has been nominated by Cliff K9QD and seconded by Danny Kafka KD9HIL.  So moved.  John is hereby elected by the Board of Directors to handle the club’s finances until such time as Chris can return.

John K9WIC will contact our insurance carrier as well as confirm our data line payments are current.  Geoff KA9QGH has been personally funding ZOOM service and can continue without reimbursement for the moment.

John Zietlow K9WIC informed the possibility Civil Air Patrol may be a participant in Illinois EMCOMM statewide exercise to test simplex capabilities February 27, 28th; details will be published as soon as plans are solidified.   Additionally, the rumored newly-imposed $35 FCC fee for Amateur applications is not currently being imposed.

Ed Lishka AC9SD informed testing is likely to remain on hiatus until an appropriate facility can be found.  Dennis C. Calvey KD9HIK reported the Schaumburg Park District predicts an eventual re-opening but the schedule remains uncertain.

Thank you to all the hams that checked into the Tech Net last night.  The question for the evening was

not a question but asking for help.  I installed an inverted V fan dipole cut for 40 and 20 Meter.  My SWR and impedance are terrible.  Discussions were had and a lot of good ideas were presented for

me to investigate.  Ii will keep everyone up to date on how I progress on tuning the antenna

I want to thanks all the hams that checked into the net Tuesday evening.  The question

for the evening was do you have any traps in/on your amateur radio antenna. I have

emailed some articles on how to build traps and also how to calculate to those on tonight’s Net.  Also check out article: Modeling Trap Antennas by L.B. Cebik W4RNL.

Stay safe and have a great New Year

The following operators checked into the TechNet:

Please let me know if there are any corrections or additions.

Topics included recently completed projects, limitations for Technician Class licenses within the US Band Plan, and some propagation reports on the 20 Meter band.

Roberto, WA9E, also reminded us that the repeater must drop between transmissions for EchoLink users to be able to access the repeater.

Mike K9KMV No Report.  For the December RHG Mike published an article submitted by Mike Sorensen K9KQX regarding his recent Go Box Case construction.  Also published was the recent tower takedown video by Roberto WA9E and made available on the SARC YouTube channel.

Additionally, Dave Simms K9KBM provided us with some useful insight regarding guidelines by automotive manufacturers relating to the use of RF in modern vehicles.

Insurance, Meeting Room Reservations for the Airport, Tennis Plus Basement, and CRC, need to be renewed for 2021.  Cliff K9QD resurrected previous traffic to assist in establishing the proper governmental contacts required.

Dennis C. Calvey KD9HIK Publicity Chair reported there may not be a published re-opening plan from the Schaumburg Park District for several months.

John KD9KSH Nothing to report for obvious reasons.

John K9WIC reminded the Wheaton Ham Club’s January HamFest will be a virtual event. He also hears the Sandwich HamFest this spring could remain a possibility depending upon the state’s eventual re-opening.

The 2021 WCRA Hamfest is being held virtually due to COVID-19. Come enjoy the 54th annual observance of this great event.

Forums Times for the 2021 Hamfest

Since this event will be held virtually, admission is free this year.

To get an idea of how many people will be attending, we ask that you please register for the event thru Eventbrite.

It is unknown if our insurance has been renewed; normal renewal cycle is ~April/May and we will need to check with our records to ascertain current coverage.

Russ Schmidt KC9NUV reminded repeater users to avoid religious/political dialog as these are not considered appropriate use of the resource.