On Saturday June 1st, the monthly Saturday breakfast was held, as usual, at Maxfield’s Pancake House in Schaumburg.

There were a number of club members present, enjoying good food and friendly conversation, as can be seen in the photo below. 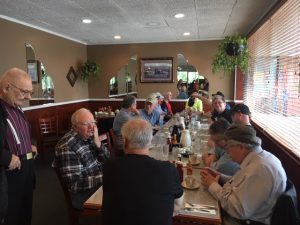 This is typically held on the first Saturday of each month, starting at 8am sharp.

For further information and details of the location, please check the Saturday Breakfasts link.

NJ9E Dale, ham radio operator for 50 years this year, brought three go Kits and antennas to show at the meeting. 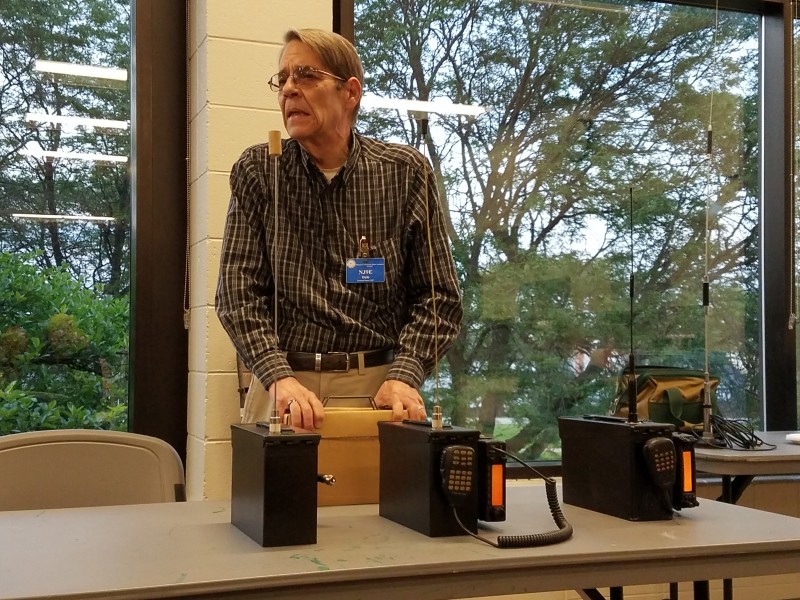 As part of his presentation he explained the origins of the Wayfar repeater… The 4th repeater in the Chicagoland area. He has been president of different clubs in the area and as part of that began working in emergency communications.

Using an ammo can he puts together a kit with a 7Ah battery, antenna mount and power pole connections. All you need to add is your own radio. It’s a compact package as you can see from the photo below. He reminded us that in nearly any deployment you’re going to be listening 90% or more of the time so the 7Ah battery is sufficient. He has managed 30 hours of listening with this setup.

He had several suggestions about what to keep in the extra space in the case including: a flashlight, programming cable, bullet connector, radio manual among other items.

When talking about deployment he showed off a slingshot and fishing reel setup for launching a line into a tree to hoist up your VHF vertical antenna. It was a very compact tool which is great for portability. He stressed that with VHF or UHF line of sight is the limiting factor and height is your best friend.

He sells the the boxes completely assembled or as a pre-drilled box ready to accept parts. Look for him at local hamfests.

So, Field Day has come and gone. There were some attendees that thought this was the best Field Day that they have ever been to, and there were others who thought the turn out was less than lack-luster. I suppose the most important thing was that for the people that attended they we able to get their Field Day itch satisfied. For all of those that did not attend, on such a stunningly beautiful day, I have no clue. The SSB Phone tent was SSB’ng and the GOTA tent, both of the them were…. GOTA’ng and doing the needful by educating newcomers and getting people on the air. The CW tent just barely bested last years results before the plug was pulled an hour before the official end. All in all, it was a good Field Day. Like every Field Day we are compelled to evaluate what was good, what was bad, and what we will never do again.

Here are some thoughts on what was good.

Here are some thoughts on what we can improve.

Some thoughts on what we are never going to do again.

So, my pledge to this club is that I will be running for re-election as President. In addition to this, I will push to remove the Field Day chair position and incorporate it with the duties of the next elected President. I will also push to have the dues to be paid by the member, who wins the next and future election to the President’s office, waived.

Chairman Leo Ribordy N9NBH called the meeting to order at 7:00 pm and noted that there was a quorum.

Current number of paid members is 78. Dues need to be paid by the end of June to cover the Club insurance for Field Day.

Leo Ribordy N9NBH reported on the following: It seems that the repeater at AMBC isn’t functioning properly. Information on this will be forwarded to Bob Clark. In reference to the nets, if those assigned can’t make it for some reason, please make an effort to get coverage.

Ken Krzywicki KD9HIJ: Approval of May 2019 BOD minutes as published on our website.

At this point a motion to accept both the Treasurer’s and Secretary’s reports was made by Frank N9QPD, and with a second by Danny KD9HIL, was passed unanimously.

No report available. However, Jim Campbell KB9RGU sent an email reporting that the EmComm Sunday night net which meets on the first Sunday night of the month will no longer be in operation after 7 July 2019 due to a lack of support. He will be net control one last time on 7 July. His thanks go to all for the experience.

John KD9KSH reported that there are 17 people signed up for the J pole construction on June 15th. They plan to make a total of 20 J poles and lunch is planned for afterwards.

Leo N9NBH has contacted the Schaumburg Library (Hoffman Estates facility) about the Technician Class. To date, there hasn’t been a response from them.

Failed to upgrade: 0. Next examination date is 6 July 19. At that time there will be new

Element 3 exams for the General exam.

Rob N9MVO (not in attendance) will be sending information reference the Hoffman Estates 4th of July activity.

Both Leo N9NBH and William KD9AUP will be looking for a speaker for our July Club meeting:

Initially it appeared that we might not get Field Day off the ground due to a painting issue at the site. As of now, Rob N9MVO has secured the permit and we are a “go” for June 22nd and June 23rd. We have tent captains and set up is Saturday 22 June beginning at 9:00 am. Location is the water tower off Plum Grove Road in Schaumburg. We need volunteers to set up and assist with take down. Please contact Rob N9MVO, or Club President Geoff who has volunteered to be in charge. We have budgeted about $200.00 for expenses. Some members have already volunteered their time and materials.

With no further business to discuss, a motion to adjourn was made by Ken KD9HIJ, and with a second by William KD9AUP the motion carried.

SARC In The Park:

Thanks to Dennis KD9HIK for bringing coffee and donuts.

President Geoff Stevens KA9QGH called the meeting to order at 7:00 pm. There is a quorum.

Geoff KA9QGH is the chair for this year’s Field Day activity. His question for the night was for a show of hands of those planning on attending Field Day. Most of the hands in the room went up. Bill W9WEM will be handling the food prep and cooking. He needs some volunteers for Sunday breakfast set up. Dirk and Kevin will be providing generators. Things still to be decided upon are a first aid kit, operator cheat sheets, safety officer, logging software, heavy gauge extension cords, radios and tuners.

A budget in the area of $300.00 has been approved for this activity.

Approval of the Meeting minutes as published on our website. A motion to accept the minutes was made by Matt AC9IG, and seconded by Leo N9NBH. Motion Carried.

Ken KD9HIJ has been in contact with the Elk Grove Township supervisor who is moving their operation from Arlington and the tollway into Elk Grove Village at Landmeir & Tonne. There is a 40 to 60 foot tower there that they are willing to donate to SARC. The plan is for a crane to take the tower down and place it on the ground. We would have to go there, take it apart and cart it away. This could happen within two weeks. Their legal person is more than likely going to ask for us to sign a letter of indemnification releasing them from any liability should one of us trip, fall, etc.

A motion to accept their offer was made by Matt AC9IG and with a second by Phil WB9C, the motion carried. On 6/21/19 Ken KD9HIJ spoke with the supervisor and confirmed that we would gratefully accept the donated tower. He also said that he would like to do a public service article about our activities. I told him we would be contacting him in the near future about that.

Dennis KD9HIK has put out informational notices about Field Day to the Daily Herald, Village Trustees, and various senators inviting them to attend.

Still working on the problem.

Rob N9MVO reports that the MS walk was a success. Our next event is the 4th of July parade in Hoffman Estates. We handle various responsibilities such as lining up the units, parade route, parking line up, going in order, keeping in touch with the reviewing stand, resolve loud music conflicts, etc. Details will be forthcoming via email soon. For those who intend to participate and want to eat early, the restaurant at Higgins and Barrington is available. EMCOMM frequency #4 will be used and #5 will be the backup.

The Schaumburg Triathlon will also be coming up at the end of July. This is a must attend and participate. They have been very generous to us over the years. Matt AC9IG says that there is another Field Day coming up and the signup sheet is on our website.

Matt AC9IG reports that we have about 200 plus sign ins for the two yearly awarded prizes.

Leo N9NBH reports that we have secured the Hoffman Estates facility for the Technician class beginning in September.

Bill KD9AUP will be the chair for this activity.

**Bob Zuttermeister, who generously donated his shop space for this project, has donated to the SARC all the proceeds for the cost of the materials. A check for $400.00 was presented to the President. Many thanks for your generosity.

SARC in the Park:

Dennis KD9HIK brought coffee and donuts. Thanks for that.

With no further business to conduct a motion to adjourn was made by Ken KD9HIJ and seconded by Danny KD9HIL. Motion carried and the President closed the meeting at 8:00 pm.

After the break, our guest speaker, Dale Kwarta NJ9E made a presentation relating to portability. He spoke of many things related to the portability of radios. He has put together kits from ammo boxes which contain a battery, top antenna, power cord, paperwork, license, manual, flashlight, etc. Very compact and efficient. He sells kits and finished products. He also recommends a “Hummingbird” battery which he considers worth the money and it comes with a battery regulator.