Last week I decided to set myself a challenge. The challenge was to operate from 3 new (to me) State Parks within a week, as part of the POTA (Parks On The Air) program.

With winter temperatures still with us, the gauge in my car measured the outside temperature at 4 degrees F. “Why am I doing this?” I thought as I drove to my destination. Well, I want to prove to myself that I can. Simple as that.

Arriving at any State Park for the first time is interesting. Not knowing the layout of the park, suitable operating positions, etc., especially when the snow often seems to block access to certain sections. Google Maps and its Streetview feature can help for some pre-planning, but it is not a failsafe.

I found a suitable spot that had a picnic bench in just about the perfect place, so I decided to setup.

Here are some photos of the deployment:

I used my FT-891, with a homebrew ammo can battery box (12v 18Ah), and a 20m LNR Precision endfed. The antenna was supported by a 31’ Jackite pole mounted to a hitch support on the back of my vehicle, and then sloped down towards to the picnic table. No need for a tuner, the antenna is resonant on 20m.

I operated for about 2 hours (my typical deployment), and made 44 contacts, all in North America. 3 of those were Park to Park contacts, making contact with operators also activating other national/state parks.

Less to write about for this one. I didn’t get much in the way of photos either. I used the same deployment, just concentrating on 20m.
This time I setup and operated from the passenger seat of my vehicle. This park is much smaller with just one parking area, most of which was blocked from all of the snow plow pileups. Unfortunately that was the only kind of pileup I encountered that day!
I made 32 contacts, all within North America.

Saving the best till last! I wanted to try a different band this time, so I setup as normal with my 20m antenna, but then also deployed my LNR 40m endfed with the help of an additional tripod/20’ mast combination. This allowed me to setup an inverted L, with the feed point near the ground and the coax running towards my operating position. Again, I operated from the passenger seat of my vehicle.

The best part of this activation was the contacts I made. On 20m, I had a pileup from Europe as well as North America, with a total of 79 contacts.

Below is a neat map (courtesy of www.qsomap.org) showing all the contacts that I made that day, and all within a 2 hour period. 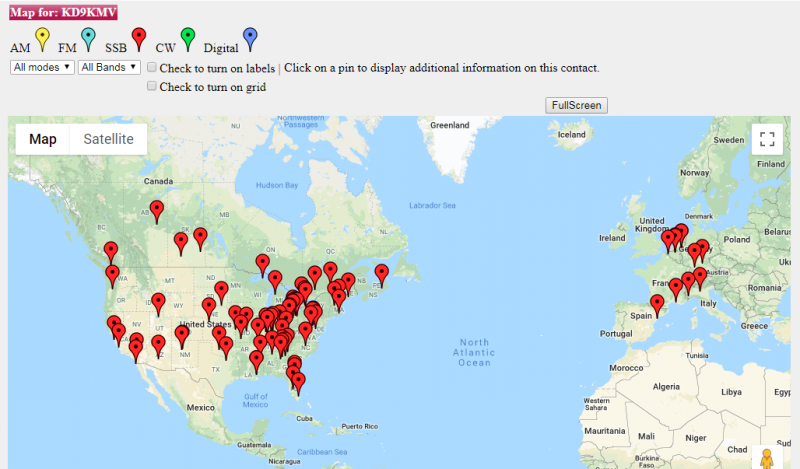 As you can see from the map, I worked into Germany, France, Spain, Italy and Belgium. One important reason for the pileup was that I was activating a park that people needed, as part of Parks On The Air. With band conditions as they are, having a reason for people to reply to my CQ calls helped immensely.
I had never been on the ‘good’ side of a pileup before. It was fun and stressful at the same time.
Best of all, challenge successfully completed, 3 parks in 4 days,
73, KD9KMV

Geoff KA9QGH President called the meeting to order at 7:00 PM.

Geoff KA9QGH opened the meeting with introductions and Question of the Night:  “when using phone, do you talk directly straight-on or on the side?”  Finished discussion on imaginary numbers and survey shows there is only limited interest in Extra class.

Dennis Calvey KD9HIK will be contacting the Board with some publicity ideas.

Terry will be purchasing spares for our machines.   The BOD has approved $200 headroom for inventory acquisition.

Cliff Sowka K9QD:  Approval of Meeting Minutes as published on our website.

There will also be a joint exercise involving multiple communities and agencies during the week of June 17-21, 2019.  This exercise will likely include amateur radio participation.  It should be noted that time is the week leading up to Field Day.

Meeting this coming Saturday is on schedule.  We had attendance of 29 people last session.

The current Park District Free-Rental Agreement for the basement facility needs to be renewed.  Vince K. has retired and the ladies at the front desk of the Tennis Club told us Richard W. was the new Superintendent.  We will need to renew our insurance rider as well.

John KD9KSH not present; will assume Social Chairman Role for 2019.

Leo N9NBH reported he will hold a Tech class this fall and the library district requires 6-month notice for publication.  Mike Griffiths KD9KMV inquired if there is interest within the club for CW classes. Several discussions revolving around the viability for continued CW operation within the Ham Community ensued.

Rob N9MVO reported MS Walk is moving all the way to Roselle May 5th.  Rob will have the MS Society link posted to SARC-ALL as this will help them register participants.  We need to arrive about 7AM for the 3 mile walk.  We’re usually finished by 11AM.  Expect about 1 mile propagation needs so an HT is adequate.  Rob expects he’ll need about 10 hams to work the event.

Future events include Hoffman’s Fourth of July Parade and Triathlon in the summer; details soon.

Tech Net Tuesday 7:30 and general net every Thursday 8PM except the third Thursday of the month.

Salvation Army has been given our club’s permission to use our 2M machine on Monday nights.  Their reports are indicating they’re able to hear participants from Rockford and Rochelle;  state our machine’s coverage is working well for them.

No eBay sales to report

Committee asks membership to approve mechanism presented to the Board of Directors during February session that allows the club to remove an undesirable member(s).

No member shall act in an official capacity on behalf of SARC, or allocate/order emergency funding without having prior approval of three (3) members of the Board of Directors.

Mike KD9KMV purchased a solar panel and battery but seemed to be non-operational.  He took some measurements and then called customer service desk.  It seems the required 13V is not available but he measures 20V with no load.  The group tonight offered some ideas to trouble-shoot the equipment.

Submitted: March 22, 2019 by Cliff K9QD during the prearranged absence of Ken KD9HIJ, Secretary.

John K9WIC presented information about SKYWARN at the club general meeting on March 21, 2019. He’s provided the following notes from his presentation.

March is here and that means the return of SARC in the Park. This is an outstanding opportunity for anybody that wants to get on the air and make a contact, that does not go through a repeater. This is Ham radio….old school!  If you have never operated an amateur radio, now is your chance! The group will be out there, roughly every other weekend, depending on weather. Don’t just stand around and watch, ask somebody if you can operate, they will gladly help you make contacts and talk to somebody over the horizon.

There is a very common issue that has afflicted most hams in the very beginning. This malady is called “Mic Fright”. It’s the fear a new ham has of actually picking up the microphone and saying something wrong or sounding stupid, and it is very normal. A good Elmer will never let you sound stupid, and we have lots of good Elmers in the Schaumburg Amateur Radio Club.

Field Day 2019 is coming. We look forward to this day as it is an opportunity to work on the radio for 24 straight hours. Similar to the SARC in the Park events, Field Day uses all emergency power to make as many contacts as possible. I highly recommend putting your name on the sign-up sheet that can be found our website, WWW.N9RJV.ORG [In mid April – Ed.]. Just showing up thinking a radio station will be open usually ends in disappointment. Typically, there are not a lot of operators in the overnight hours. For example, I walked around the Field day site at around 2 AM, last year. There was nobody on any of the radios, so I sat down on the Sideband Tent, fired it up and started calling CQ. After about 5 minutes I was working pile-ups on the 20-meter band.  I Made about 40 or 50 contacts before heading in for a nap. I remember I had to leave three stations still calling when I turned the radio off. The sideband radio station was not turned on again until after sunrise and breakfast was served. There is no reason for not getting on the radio.

Hope to see you out there.