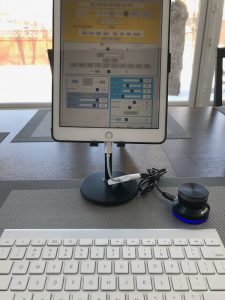 Operating A Home Station From A Remote Location, by Jack W9YY

My wife and I rented a condo in Florida for the month of January. We had been to this condo before, and I knew that there was no possibility of installing an antenna for the month, even temporarily. So I chose to investigate how to leave my rig at home in Hoffman Estates and operate it remotely through the internet.

My HF station consists of an ICOM IC-7300 connected to a long wire on the backyard fence. It uses the internal antenna tuner on the ICOM for operations on all bands 80 through 10 meters. All of my HF activity is on CW.

I discovered that there were several approaches to remote operating. Many required computers at each end. Several required a long list of tasks to follow to get the rig to talk to the nearby computer, and another list to get the two computers to talk to one another over the internet. This all sounded complicated. I didn’t have enough spare computers or laptops to use, and I was concerned that I would not be able to troubleshoot the system from Florida.

But I did find a solution that didn’t require computers or programming. It is a subscription service called RemoteTX. Here is how it works.

At my home QTH, I purchased a Raspberry Pi. RemoteTX sent me a program to load onto the Pi, and they gave me a unique access to their server. The program that I received works with the IC-7300 and communicates through my home router to their server. I loaded the program onto the Pi, and then connected a couple of cables. Since my station is not near my router, I set the Pi to connect to the home router through wi-fi.

At the remote location, all that I need is an iPad or iPhone. I chose to use the iPad at a desk in the condo in Florida. I purchased an optional tuning knob so that I didn’t have to use arrow buttons on the iPad screen to change frequencies. I also brought along a wireless keyboard for sending the CW instead of using the keyboard on the iPad. Because of the variable internet delay, the CW has to be sent by keyboard, which then works with the internal keyer on the ICOM, in order to keep the dot, dash, and letter spacing correct.

At the home station, I purchased an optional sound card so that the ICOM audio is transmitted back to me at the remote location. This is handy for listening to the CW that is being sent, but it is not absolutely necessary.

The picture included with this article shows the remote setup with iPad, tuning knob, and keyboard.

So the next time you hear me on the air, I might well be operating from remotely. By the way, a common exchange on CW is the weather. But it was difficult to say that the temperature was 20 degrees in Hoffman Estates where the transceiver was located, when I was actually in a location where the temperature was 60!

See you on the air!

220, 221- Whatever it takes.  Electric Utility Service Drop…and why the service drop to the consumer has a center-tapped transformer grounded to earth.

Note the Utility Transformer’s center-tap is grounded at the pole.  Also, the consumer’s service entrance panel and Neutral/Equipment bonding bars are also grounded to earth.

Origin of ‘grounding’ and why utilities in the early 1900s quickly changed to (for single phase service) center-tapped transformers at the customer’s drop.

Homes needed 110V (ok, 220, 221- whatever it takes) so a pole-pig (transformer) hung on the High Voltage line out at the lot-line’s right-of-way with the Low Voltage drop going into the home.

Transformer design was very well developed at the time but internal windings with dielectrics using mica, mineral oil, and other insulation approaches (paper/cloth/enamel insulated windings) were only kind-of adequate.

Experience quickly revealed a terrible weakness:  if a lightning strike upstream traveled downstream or if internal insulation in the transformer failed for whatever reason while the service continued to be apparently fine, that puncture could allow the local neighborhood’s 12KV (4.8KV whatever) distribution voltage on the PRIMARY to appear on the secondary and onto the home’s wiring.  Home wiring method typically used was knob-and-tube, or single conductors suspended with-in or with-on the internal structure of the home.

1900s Electric Utility Service could include Center Tapped (CT)  Secondaries but note the CT is not grounded to earth. 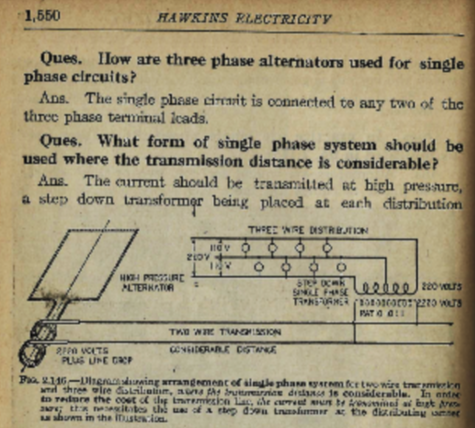 One could reach for the electric toaster and receive 12KV above ground!

The 110V AC branch circuits in the home did not provide for Hot/Neutral, but rather simply provided 110V AC.  Neither wire was referenced (connected) to an earth ground in the service panel.

Solution:  Center-tapping the customer’s distribution transformer secondary winding and connecting that tap to earth would provide a reliable low-impedance path if the insulation between primary and secondary failed.  Additional benefit was now possible: 110 or 220V single phase.

Current-limiting (metallic fuses in those days) devices in the entrance panel could open upon the current surge of failed windings.  No more 12KV on the Knob-&-Tube wire harness in the home.  BTW Knob-&-Tube has been shown to be a reliable wiring method over time but it doesn’t provide the superior safety benefits of electrical metallic tubing (EMT) wiring codes required by many municipalities today.

Grounding is important for many reasons.  Some history reveals just HOW important grounding is for the electrical utility supply.

Board of Directors Meeting March 3, 2021

With the help of Geoff KA9QGH’s ZOOM-enabled call, Burt Schultz AB9CV called the meeting to order at 7:00 PM.

The Schaumburg Amateur Radio Club has assisted with communications for the Natural Multiple Sclerosis Society’s MS Walk for years and years.  They usually schedule the event about the first weekend in May.  It’s usually on the same weekend as the Sandwich Hamfest, which is why I haven’t been to Sandwich before.

They have kind of an unusual event planned this year, due to the COVID pandemic mitigation.  Instead of having a single event with hundreds of walkers at a single location, with food, music, mingling, superspreading, merriment and desired ham radio communications assistance, they planned a program where each walker will walk around his/her block (or as far as he/she wishes) in his/her own neighborhood.  This will eliminate the large group gathering, at least much of the superspreading, as well as the need for music, tents, food, a fixed route, and amateur radio communications assistance.

The good news is, I might be able to get to Sandwich, if that event will occur. (We will see. . .)

Rob N9MVO received a recent report our 44o machine appears about 2.5KHz below frequency.  Roberto WA9E explained FM’s unique capture ratio ability would easily mask any offset.  Since the machine is a commercial unit, and since it is housed in the tower’s access tunnel, it resides at ambient temperature and could be susceptible to some drift. SARC repeater team plans to place our Fusion Radio at the Plum Grove water tower; Roberto WA9E reported a few northern Minnesota repeater’s performance of Fusion radios performing well in -20F weather.

Mike K9KQX has offered assistance with donating and installing his surplus link hardware that will enable feature installation for the Fusion Radio.  The repeater team will contact Mike to begin plans once better weather arrives.

ECHO Link performance has been going well but the verbal annunciations hinder flow.  The set-up for system configuration likely has a method to suppress unnecessary IDs being repeated on every transmission.  South African and Israeli participants have joined the morning drive time and we’ve had up to four stations work the repeater with little disruption.   Our $68 per month data line fee is thought to provide speeds of about 3Mb down and about 256K up which is adequate for voice; we know it handles 3 to 4 stations well enough.

Ed Lishka AC9SD informed the VE Team is utilizing the Construction Project basement venue this coming Saturday for their second testing session this year.  The candidate winning Extra during the last test session found his FCC registration to be valid after about a 2-week delay and was happy to have SARC’s VE support.

Geoff KA9QGH hasn’t received any traffic and now that Daryl KB9RHR has assumed responsibility the website’s link will need updating.

Dennis C. Calvey KD9HIK Publicity Chair mentioned our Construction Project re-opening could be announced in the press but hesitant to make public since the Park District limits attendance to SARC Members only at the moment.  There may be opportunity to announce SARC participation in the up-coming Chicagoland Marathon as well.

Robert W9RKK wished to know if previously-tabled item should be brought forth:  Idea to utilize club funding two new radios for Field Day.  Question of Village approval of our water tower site this spring and question of where the club’s assets would be stored were discussed.  It’s an appropriate use of the club’s resources but may be premature to authorize such a substantial purchase at the moment.

Bob Langsfeld WB9TZC has delivered 100 masks and a gallon of hand sanitizer donated to SARC by the Salvation Army to be utilized during the reopened Construction Project gatherings.

Ed Lishka reminded us about a previous charitable donation possible with Amazon purchases:  purchases can be ~0.005% if smiles.amazon.com has SARC in the purchasing-person’s profile.  John K9WIC and Dennis KD9HIK will check to determine bank-routing and/or 501c3 documentation has to be loaded to begin the benefit mentioned by *IJS during a previous meeting.