Rob Glowacki N9MVO no report.  Chicago Marathon event is scheduled for  October 10th.  Supportive Hams are requested to be in-place by 6:30AM.  Bill Riess KW9WR previously explained there is a background check and registration process for applicants to complete before selections are finalized.

Schaumburg Public Safety Day was held Saturday October 2nd at Fire Station 51.  SARC members hosted a booth demonstrating Amateur Radio capabilities to the public.  Our support was greeted with a special shout-out to all the hams that showed up to support the Schaumburg Public Safety Open House.  You helped make SARC’s efforts very successful.

Also special thanks to Dennis KD9IK, Barry K9FMB, Rob N9MVO, and Cliff K9QD for their efforts to setup and man the booth.  Thanks also to Dirk W0RI, Jim KC9UFB and Charlene K9CMZ supporting the effort and helping to share ham radio with the citizens of Schaumburg.  I also want to thank the many members of SARC and the Schaumburg Emergency Radio Team that dropped by to say hello.  (A special thank you to Cliff K9QD for trying to dump the 700 pieces of candy in multiple buckets when the parents weren’t looking!)

Previously, Rob N9MVO received word from the Wisconsin Repeater Association that the operators of the WE9COM repeater in Dodgeville, WI, often heard on the SARC frequency, has not changed anything with regard to their transmitter power or antenna.  They did say there has been a lot of ducting this year, so Mother Nature is causing them to be heard SO WELL on our frequency on those occasions.

‘It’s not nice to fool Mother Nature,’ a commercial said in the last century.

If you have problems with their repeater signal stepping on the SARC repeater, when SARC is transmitting, please let me know by email.  We can then have the WI Repeater Association look into the situation.

The results were entered into the FCC ULS database on Monday October 4, 2 days after the VE Testing.  This was because the documents were scanned into PDF format and emailed to the W5YI-VEC group in Arlington, TX.

Nominating Committee has contacted club members in building our slate for November’s election.  Their DRAFT Ballot has been published to the membership.  SARC Board decided to temporality suspend two annual awards of

These two recognition awards are being suspended this year because we have been thwarted in normal club gatherings during  ~2 years of COVID shutdown.

Ed Liska AC9SD noticed a peculiar US Mail receipt.  SARC has received junk mail through USPS offering to renew our domain thus indicating bots are searching for revenue by soliciting site registration services.   Barry K9FMB explained the exposure we could face if we fail to renew our domain.

Domain N9RJV.ORG is due for renewal in December so we don’t want someone to grab the domain and try to sell it back to us.

Darryl Jenks KB9RHR not present.   110 Members on the Roster.

Leo N9NBH not present.  Leo previously reported that Hoffman Estates Library is confirmed for our Technician Class beginning in January.

Robert W9RKK and Cliff K9QD will present a Standing Waves demonstration during the October Business Meeting.

John K9WIC and Rob N9MVO will be working to schedule a Data Line switch-over from ATT to Extreme DSL.

Robert W9RKK informed the Board he has radio programming files that could be offered for upload into our Website’s Resource category.  He has programming profiles for Yaesu FTM300 and FT3DR in .CSV format (no copyright concerns).  Robert requested Board Approval for Matt Walsh AC9IG (Webmaster) to post the files into our Website.  Future member-generated file resources could also be contributed to the site’s Resource offerings.   Robert has also authored a .PDF Instruction Sheet to aid in configuration. 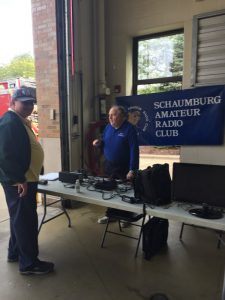 Special thanks go to Dennis (KD9IK), Barry (K9FMB), Rob (N9MVO), and Cliff (K9QD) for their efforts to setup and man the booth.
Thanks also to Dirk (W0RI), Jim (KC9UFB) and Charlene (K9CMZ) supporting the effort and helping to share ham radio with the citizens of Schaumburg. 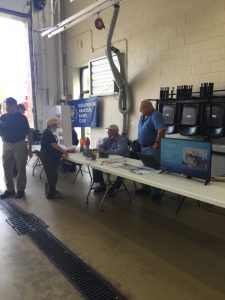 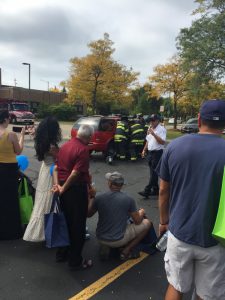 Robert W9RKK has provided two sets of files for programming the Yaesu FTM-300DR and Yaesu FT3-DR radios with local repeaters. He has graciously included both instructions with screenshots and the files to load to the radio. They can be found on the menu under Ham Resources -> Radio Programming Files.

Any other club members who would like to provide programming files for different radios to be posted on the web site please send them along using the “Submit an Article or Event” at the bottom of this web page.

Rob Glowacki N9MVO reviewed several of our past public service efforts.  Bob Zuttermeister W9GEW provided a report on the Chicago Marathon last week and the ~130+ Ham Operators who were an important resource for this large event. Bill Riess KW9WR (not present) had previously explained there would be a background check and registration process for applicants to complete before assignments were finalized.

Steve Karson AC9EM and John Shofield AC9JS discussed the recent declining trend in student candidate testing demand.  We’ve observed only one candidate for some of our testing sessions this year.

Barry K9FMB Net Chairman reported he is looking for a list of alternative hosts for the first Tuesday of a month.

Absentee Ballots for the November Election will be mailed this week with SASE that needs to be returned to our PO Box in time for receipt before the Third Week of November.

Darryl Jenks KB9RHR has requested leave and we’re looking to find someone to carry this important role.

John KD9KSH is researching potential venues for our annual event this coming January.

Leo N9NBH has obtained confirmation with the Hoffman Estates Library and reports plans for a 10-week Technician course to begin January 8th, 2022.  Leo has received offers of several volunteer instructors. Class will be from 10:30AM to 12:30PM.

Robert W9RKK and Cliff K9QD presented a brief demonstration on Standing Waves.  We are in need of a presenter for our November Business Meeting to facilitate the idle time experienced during vote-counting.

John Scrip N9IJS has been keeping the membership abreast of his graphic design efforts through the use of SARC-ALL to potentially update our ‘Official Logo’.  After receiving much commentary and performing some of our member’s suggested edits, John published several improvements.  Additionally, Bob Zuttermeister W9GEW took it upon himself to display a few Logo examples applied to some trinkets tonight utilizing John’s most recent edit.

Once the artwork is officially received, I will update the Letterhead used for Meeting Minutes and our website will be updated as well.

Club Officers and Board of Directors

On Hiatus for this cycle