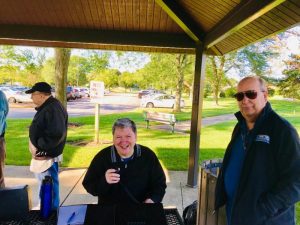 Thank you to Kevin, K9MKD for providing the following photos:

For more information about this regular club event, please check out the SARC in the Park link. 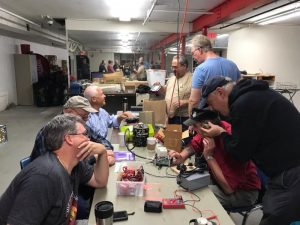 A great turnout at our club’s Construction Project Meeting today.  Here are some photos, courtesy of Kevin K9MKD.

Thank you to club member Dave, K9KBM, for providing some comic relief.

The lack of the purple grease (which is more UV resistant) has meant that we must use the green grease. Remember to wax your car before using otherwise the stains from the bird droppings (after they ingest the grease) will stain the finish. Before you shake hands check the persons thumb and index finger for stains to prevent the stain being transferred, right Ken KO9H.

Rob N9MVO is offering a reward for the return of the flux capacitor which was stolen from his 160M loop antenna. It seems the cap was borrowed form a friends DeLorean and Rob said something about not getting back in time.

The source has completely dried up but with the recent interest in Greenland Leo N9NBH Is looking for volunteers to join him on a prospecting expedition. A DC source is willing to pay all expenses after the return from Greenland, sounds fishy to me.

Dirk W0RI Has the last remaining production of C=1.1 coax. Better order yours before it’s all gone.

Bill KB9AUP has found an affordable source for WSFerrites in Aurora. Always remember to observe the polarity and distance from the end of the element if you want to stay in the band. A personal note, with two ferrites on my 10M dipole I could work 20 and 40m with a 1.2 SWR.

Mel’s antenna was seized by two men dressed in black driving a large black GMC SUV, the cops refused to file a report. The antenna was seized shortly after he started receiving an undecipherable code on 148.0Mhz every night when the Moon was full.

The last week in September has been a busy week. The SARC annual Club dinner was a widely attended success. I was unable to make it to the dinner despite my best efforts. The club also conducted a first, and possibly last annual, in-house hamfest. From what I have read, this was largely a success as well. The Schaumburg Amateur Radio Club continues to find unique and interesting ways to bring members together. This was demonstrated with the perennial Construction Project that also kicked off on the last Saturday of September. There is always something to do as a SARC member. We are also conducting a Tech class with about seven participants. Interestingly, every month there is always a report of at least a few radio licenses being issued at our monthly VE testing program. These same numbers can be extrapolated across the nation to other VE testing programs. There are potentially hundreds if not thousands of newly licensed amateur radio operators coming online every month. There is no reason why many of these newly minted hams can’t find their way to our rich and active group.

President Geoff Stevens called the meeting to order at 7:00 pm. All officers are in attendance.

The Treasurer did have a report but the Secretary was unable to copy the information (dollar amounts).

The President was in attendance, ran the meeting, and announced that Danny KD9HIL will be the new Field Day Chair.

Danny KD9HIL was in attendance and had no report.

Approval of the minutes from the 15 August 2019 meeting was requested. A motion to accept was made by Burt AB9CV and seconded by Leo N9NBH. The motion carried.

Dennis KD9HIK wasn’t in attendance but he had made a request via email asking for how much information would be available for publicity on upcoming events. That request was passed on to John K9WIC who said he would be in contact with Dennis reference his request.

Rob N9MVO will acquire the battery packs needed to update the repeater at the Plum Grove tower in Schaumburg.

Bob N9JAX was in attendance and had no report.

John K9WIC is looking for volunteers for Schaumburg’s Public Service Day being held on 5 October, and Hoffman Estates emergency management agency being held on 25 October. He will be sending out a SARC ALL soon with more details.

John KD9KSH has 32 people signed up for the Club dinner on 29 September beginning at 4:00 pm at the Lucky Monk. The room can accommodate 40 people and he is requesting that if you know of anyone who may like to attend, please give them the specifics of the activity.

Leo N9NBH reports that the Tech Class is coming along.

On 7 September 2019 VE testing was held for 6 applicants.

Rob N9MVO reports that the decathlon and the MS walk went well. The 5 October public service safety day is coming up. John K9WIC will have more information on that activity coming soon.

Bob N9JAX brought up the subject of the SARC ID Badges. After some discussion the President called for a show of hands as to whether the badges should be red or blue. Red was the color picked.

Bob W9GEW has volunteered to put together a signup sheet via email with choices for color, style, names, etc.

Leo has donated the tower from the Township to the Salvation Army. They will handle the pickup and installation at one of their satellite locations.

There was a special construction project of volunteers on Saturday 21 September to sort through the boxes of equipment given to SARC from the families of silent keys. It was also an opportunity to clean out some of the cabinets. This began at 8:00 am and was open to the general membership for bidding on the items beginning at 10:00 and lasting until 12:00. The unsold items will be going to the Belvidere ham fest on the 29th of September for possible sale.

With no further business to conduct a motion to adjourn was made by Geoff KA9QGH and seconded by Ken KD9HIJ. The motion carried. Meeting adjourned.

Board of Directors Meeting,  4 September 2019

Chairman Leo Ribordy called the meeting to order at 7:00 pm and noted that there is a quorum with all five Directors in attendance.

A motion to accept the Treasurer’s report was made by Frank N9QPD and seconded By Burt AB9CV. Motion carried.

The Technician Class is full and scheduled to begin Saturday 7 September. The Club has retrieved the last section of the donated tower and the Club now has a 65 foot Rohn 45 tower for sale.

Burt AB9CV has suggested that we consider donating it to some community who lost theirs in the hurricane. Leo N9NBH will be looking into possibly putting it on Craig’s list or even advertising it on QRZ.COM. Another possibility is contacting the Salvation Army.

Elections will be coming up in November. A check of all in attendance showed that all are interested in staying in their position. Leo N9NBH and Ed AC9SD will be calling the membership to see if there is any interest in running for the open positions.

Approval of the last BOD minutes as published in the RHG. A motion to accept was made by Frank N9QPD and seconded by Burt AB9CV. The motion carried.

Dennis KD9HIK has put together a public relations blurb for publishing in relation to the Schaumburg Public Safety open house on Saturday 5 October. That is attached to these notes. John K9WIC has suggested we only publish “SARC will be participating”.

Dennis has also acquired at his expense some brochures relative to ham radio and the cost of the brochures is his donation to the Club.

John K9WIC has written a memorandum of the EMCOMM group for September 2019. That memorandum is attached to these notes. A motion to make John the official liaison between the Club and Bill Clark  was made by Frank N9QPD and seconded by Dirk W0RI. The motion carried.

John KD9KSH reports that we have 26 people signed up for the Club dinner on 29 September and we have room for 14 more. He is also making a second request for member’s favorite web sites for publishing on the Club web site.

Leo’s Technician class begins this Saturday 7 September with a full class and instructors lined up.

The RHG is available for reading on the Club website.

We will have to check with Rob N9MVO to determine the status of the repeater at the water tower. John K9WIC says it’s time to disable and pull out the repeater that is at the hospital. There is no control operator and they have not provided us with an internet connection. Leo N9NBH will contact the hospital and determine who the contact person is and if this situation can be remedied or if we do have to pull the repeater.

John KD9KSH purchased from the Club an IC720 radio that hadn’t been checked to determine if it was functional. This was due to a shortage of time. An effort to have another Club member fix it was to no avail. After nine months the radio is still not functional. A motion to reimburse John $230.00 was made by Burt AB9CV and seconded by Geoff KA9QGH with the understanding that the radio and parts be returned to the Club prior to the Belvidere Ham Fest. The motion carried.

Chris AC9GN wrote a check and presented same to John. Kent W9KAO will contact the POD company to remove the POD before incurring additional charges.

Chris AC9GN will purchase an insurance renewal rider for the Park District Tennis Club.  Once that is done, Cliff K9QD with the rider in hand will meet with the new Park District Manager to gain his approval. A motion to allow Cliff to speak for the Club was made by Kent W9KAO and seconded by Frank N9QPD. The motion carried.

With no further business to conduct a motion to adjourn was made by Ken KD9HIJ and seconded by Burt AB9CV. The motion carried and Leo N9NBH adjourned the meeting at 8:43 pm.